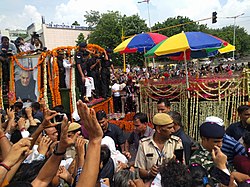 Vajpayee suffered a stroke in 2009 which impaired his speech. His health had been a major source of concern reports said he was confined to a wheelchair and failed to recognise people. He also suffered from dementia and long-term diabetes. For many years, he had not attended any public engagements and rarely ventured out of the house, except for checkups at the All India Institutes of Medical Sciences.
On 11 June 2018, Vajpayee was admitted to AIIMS in critical condition following a kidney infection. He died there at 5:05 pm IST on 16 August 2018 at the age of 93. On the morning of 17 August, Vajpayee’s body draped with the Indian flag was taken to the Bharatiya Janata Party headquarters where party workers paid their tributes till 1 p.m. Later that afternoon at 4 p.m., Vajpayee was cremated with full state honours at Rashtriya Smriti Sthal near Raj Ghat, his pyre was lit by his foster daughter Namita Kaul Bhattacharya. Over thousands of people and many dignitaries attended his funeral procession including Prime Minister Narendra Modi and President Ram Nath Kovind.